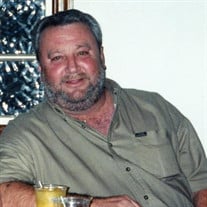 Ronald Gene Davis, 70, of Prospect, TN, passed away on Sunday, February 13th, 2022, at his residence. Mr. Davis was born on May 20th, 1951, to Eugene and Clara Marveline Slaton Davis. Mr. Davis is survived by his wife Pasty Davis; daughter... View Obituary & Service Information

The family of Ronald Gene Davis created this Life Tributes page to make it easy to share your memories.

Send flowers to the Davis family.