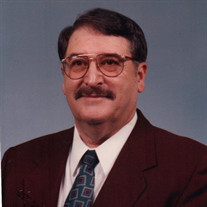 Richard Gilbert McElyea, 89 of Athens, passed away on Tuesday, December 14th, 2021, at Athens Limestone Hospital. Mr. McElyea was born on September 2nd, 1932, to Ross and Myrtle Smith McElyea. Mr. McElyea is survived by his son Richard Mark McElyea (Denita) of Athens; granddaughter Marie Elizabeth McElyea of Mobile; and a host of nieces, nephews, and cousins. Preceded in death by his parents; wife Elizabeth Emma Gean McElyea; brothers Hollis McElyea, Allen McElyea, Riley McElyea, and Rupert McElyea; and sisters Blanche Baker and Donna Taylor. Funeral services for Mr. McElyea will be Friday, December 17th, 2021, at 2:00pm at Limestone Chapel Funeral Home, with Bill Irby and A.D. Barksdale officiating. Visitation will be Friday from 12:00-1:50pm at the funeral home. Burial will be at Dement Cemetery. Pallbearers will be Bill McElyea, Dale McElyea, Steve Kerr, Andy Kerr, Bob Barton and Tommy Coblentz. Honorary pallbearers will be Dale Casteel, and Billy Abernathy. Mr. McElyea was a member of Northside Church of Christ for 60 years, where he served as a deacon for 20 years. He was one of the River Rats, and lifetime friend of Dale Casteel. He was proud to be a private pilot. He worked for the Alabama Department of Transportation for 40 years, and worked in Saudi Arabia for 2 years. He was also a member of the Alabama Ramblers Old Time Country Band. He served in the Korean War in the 1343rd Engineer Combat Battalion.

The family of Richard Gilbert McElyea created this Life Tributes page to make it easy to share your memories.

Richard Gilbert McElyea, 89 of Athens, passed away on Tuesday,...

Send flowers to the McElyea family.