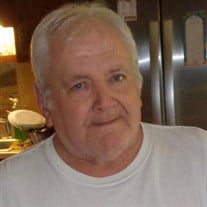 ATHENS, AL — Raymond Jerry Brown, 75, of Athens, AL, died Saturday, January 29, 2022, after a courageous battle with an extended illness. Jerry was born September 25, 1946, in Corinth, MS to Clarence and Claudine Dailey Brown. He attended Deshler High School before enlisting in the United States Air Force and serving his country honorably in the Vietnam War. After returning from service, Jerry became a proud member of the 558 Local Union Chapter of the International Brotherhood of Electrical Workers and began a successful career with Chrysler Corporation from which he retired in 2007 after making many lifelong friendships with his colleagues. He was an avid football fan, and devoted follower of the Alabama Crimson Tide, but his truest and greatest treasure was his family. His strong exterior demeanor was perfectly balanced with his tender and soft heart — earning him the nickname of “teddy bear” among his loved ones. He was a steadfast friend, dedicated provider, resolute protector, loyal husband, and supportive father. Jerry is preceded in death by his parents Clarence and Claudine Brown, sister Carol McCollum, and brother Dennis Brown. He is survived by his beloved wife of 49 years, Jeanne Brown of Athens, AL, daughters Amanda Brown of Huntsville AL, Beth Brown of Athens AL, Mary Brown of Athens AL, son RJ Brown (Lindsey) of Atlanta, GA. He also leaves behind his sister Gail Tolbert (Tommy) of Muscle Shoals, AL, and brother Harold Brown (Sherry) of Sheffield, AL. The family will receive friends at Limestone Chapel Funeral Home in Athens on Tuesday, February 1st, 2022, beginning at 12:00pm. A graveside memorial service will follow at 2:00pm at Roselawn Cemetery with Father Charlie Alookaran officiating. In lieu of flowers, the family requests donations to St. Jude Children’s Research Hospital.

The family of Raymond Jerry Brown created this Life Tributes page to make it easy to share your memories.

Send flowers to the Brown family.