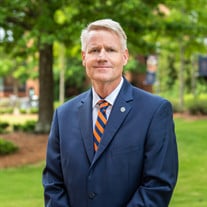 Mike Ogles, 57 of Athens, passed away on Thursday, October 14th, 2021, at Alive Hospice. Mr. Ogles was born on November 4th, 1963, To Bobby Ogles and Barbara Harwell Ogles. Mike is survived by his wife of 37 years, Nikki Bush Ogles; sons Will Ogles (Sara) and Drew Ogles (Jordan); grandchildren Abbie Ogles and Andy Ogles; father Bobby Ogles; Father-in-law Albert Bush Jr. (Ann); siblings; Mark Ogles (Andrea), Deborah Ogles Taylor (Scott), and Daniel Ogles (Paula); Brother-in-law Alan Bush; nieces and nephews; Matthew Taylor, Emma Taylor, Paige Ogles, Grant Ogles. Mike Ogles, a resident of Athens, was a member of the Market St Church of Christ and a graduate of Athens Bible School. He enjoyed running and was a cross-country State Co-champion his senior year in high school. He studied mechanical engineering at Auburn University where he graduated as the top Mechanical Engineering Graduate of the Quarter and was a finalist for Engineering Graduate of the Year. Mike and Nikki loved watching sports, especially when their sons and grand kids were competing. Anyone who knew him knew of his love for all things Auburn. His grandkids affectionately referred to him as “Tiger”, reflecting his love of Auburn sports. His hobbies included thrift store shopping and selling on eBay, as well as being able to quote most of the Andy Griffith Show. His professional career centered around his interest in NASA, inspired by his dad’s work in the Apollo program. His career culminated in what he called his dream job as the Director of NASA Programs at Auburn’s Samuel Ginn College of Engineering. He was very focused on helping Auburn engineering undergraduates and sought funding for tutoring and research grants for graduate students. Mike, along with his brother Mark, recently established an Engineering Scholarship Endowment that will provide scholarships to Auburn mechanical and electrical engineering student for years to come. The family requests in lieu of flowers that donations be made to Alive Hospice facility in Nashville Tn. Preceded in death by his mother, Barbara Harwell Ogles. Funeral services for Mike will be Wednesday, October 20th, 2021, at 11:00AM at Limestone Chapel Funeral Home with David Cox, Steve Taylor, Kasey Harbin, Marty Adams, Scott Abernathy officiating. Visitation will be from 5:00-8:00PM on Tuesday the 19th at the funeral home. Private burial will take place at Roselawn Cemetery.

The family of Michael R. "Mike" Ogles created this Life Tributes page to make it easy to share your memories.

Send flowers to the Ogles family.