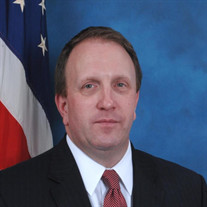 Jeffery E. Peterson, age 52, of Athens, Alabama passed away suddenly on November 3rd, 2021, at Huntsville Hospital. He was the loving husband of Paula Peterson, of Athens, to whom he had been happily married for 23 years. A graduate of Tusculum University, Jeff served as a police officer in Oak Ridge, Tennessee and a deputy sheriff in Anderson County, Tennessee from 1989 to 1997. His love of public service led him to a career as an FBI Special Agent where, in 1997, he was assigned to criminal matters in the Detroit Division, and counterterrorism following the 9/11 terror attacks. He received the FBI Medal of Bravery for his actions during an armed standoff. He was later selected for the Attorney General’s Protection Detail, serving Attorneys General Ashcroft and Gonzalez, until 2005 when he was promoted to coordinate the FBI’s Civil Aviation, Maritime, and Rail Security programs in the Counterterrorism Division at FBI Headquarters. Because of his skills and abilities, Jeff was transferred to the Critical Incident Response Group where he helped plan and manage the FBI’s leadership of the WMD render safe response. In 2010, Jeff transferred to the FBI’s Little Rock Division where he oversaw the execution of one of the largest operations in FBI history – Operation Delta Blues – for which he received the U.S. Attorney General’s Award for Excellence. In 2013, Mr. Peterson was selected as Chief of Staff to the Assistant Director of the Criminal Investigative Division at FBIHQ, serving as a key advisor to the Assistant Director. In 2014, he was appointed as Assistant Special Agent in Charge of the Nashville, Tennessee Resident Agency and led all FBI operations in Middle Tennessee until his promotion to the Senior Executive Service as the Chief of Staff for the Executive Assistant Director (EAD) of the Criminal, Cyber, Response, and Services Branch at FBIHQ in 2016, a role affording him a unique window into the highest levels of the FBI, U.S. Government, and international partners. With his success in that role, Jeff was again promoted, to Special Agent in Charge of the FBI’s Anchorage Field Office, overseeing all aspects of FBI operations and personnel in the state of Alaska and the Arctic region. Like he did in his prior roles, Jeff built on and expanded relationships, focusing efforts on the Murdered and Missing Indigenous Women program. The Alaska Federation of Natives bestowed upon him the honorary Chief’s Necklace for his honesty and hard work for justice. Jeff returned to FBI Headquarters in 2020 as the Deputy Assistant Director of the FBI’s Strategic Realignment Project Management Office, principally overseeing the FBI’s ongoing transition of thousands of FBI employees to the Redstone Arsenal in Huntsville, Alabama. At the time of his death, he concluded his FBI career as the Senior Advisor to the FBI’s Redstone Project, retiring in October for a private sector position. Within and outside of the FBI, he was known as an enabler and connector, making sure his associates could advance the mission by leveraging others in his network. Jeff was a skilled problem-solver who brought people together for shared successes and he was quick to give credit to others rather than seek it for himself. Jeff was a man of great faith with a heart for volunteering. He loved serving others. A member of the Asbury United Methodist Church in Madison, Alabama, he gave his time to the Heartland Golden Retriever Rescue Group and the Child Rescue/Reintegration Center in Sierra Leone. While in Alaska, Jeff worked with the homeless shelter and supported Covenant House efforts to lift up at-risk youth. He was a friend and mentor both inside and outside of the FBI, enthusiastically sharing stories, insights, lessons-learned, and his time and energy. A man with many hobbies, Jeff was a Jeep lover and an avid photographer, posting amazing images from his travels on his social media feed. He enjoyed sports of all kinds, was a lifelong Detroit Tigers fan, loved the Nashville Predators and UT football. While living in Alaska, Jeff and Paula served as house parents for college baseball players from the lower 48 states playing in the Alaska League focused on transitioning into professional baseball. Jeffery Peterson is survived by his loving wife Paula, and his sister Patricia Shanahan (Michael) of Kalamazoo, Michigan and sister Wendy Underly (Richard) of Marcellus, Michigan, sister-in-law Katherine Ballard (David) of Lebanon, Tennessee and sister-in-law Vickie Watson of Kingston, Tennessee. He is proceeded in death by his parents Edwin and Marjorie Peterson of Portage, Michigan, and sister Nancy Rooze’e (Ronald). In addition, he is survived by nieces and nephews Kelly Genez, Sean Shanahan, Laura Wells-Rooze’e, Jason Rooze’e, Chad Underly, Nicole Underly, Cory Watson, Casey Watson, and Brady Ballard. A visitation will be held at the Asbury Church, 980 Hughes Road, Madison, Alabama on Saturday, November 6, 2021, at 11:30, followed by a service at 1:00 pm. Memorials/donations in lieu of flowers to: Donate to support the families of fallen FBI Special Agents at FBI Agents Association at https://fbiaa.org/ways-to-donate Heartland Golden Retriever Rescue Group at https://greatnonprofits.org/org/heartland-golden-retriever-rescue

Jeffery E. Peterson, age 52, of Athens, Alabama passed away suddenly on November 3rd, 2021, at Huntsville Hospital. He was the loving husband of Paula Peterson, of Athens, to whom he had been happily married for 23 years. A graduate of Tusculum... View Obituary & Service Information

The family of Jeffery Peterson created this Life Tributes page to make it easy to share your memories.

Send flowers to the Peterson family.