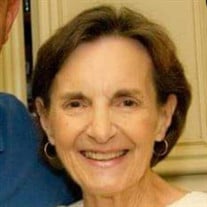 Janet (Sue) Elliott Waggoner, 87, of Athens AL. passed away peacefully at her home with family present on April 23, 2022. Janet was born March 3, 1935, in De Queen Arkansas to John and Imogene Elliott. In 1937, during the Great Depression, she moved with her family to Wink TX where she attended Wink High School. Janet maintained that she was the “Pretty Woman” that inspired her Wink classmate Roy Orbinson’s hit song “Pretty Woman”. Janet, in fact, performed a couple of times with Roy during high school. Janet loved music and was a member of the Wink High School Band; first playing the flute and then eventually leading the entire band as the Head Drum Major. After graduating from high school, she initially pursued a Nursing Degree from Texas Christian University in Ft. Worth TX., but in 1956 she fell in love with, married and followed Gerald B. Waggoner, her husband of 58 years, who had been drafted into the US Army to Huntsville Al. Following a 2-year stint in Huntsville, Janet and her family moved to Athens where she attended Athens College and in 1960 earned a Bachelor of Art Degree. Janet then began a nearly 30-year teaching career as a First-Grade teacher at Athens Elementary. Shortly after transferring to Julian Newman Elementary in 1973, where she again taught first grade students, Janet enrolled at Alabama A&M and earned a Master of Education in 1977. While at Julian Newman Elementary, she became the Director and Instructor of the Title 1 Reading Program for all three elementary schools in Athens---a job and challenge she truly loved. Janet also loved to view art museums and galleries, especially with her daughter. She loved fishing and boating on the nearby Elk and Tennessee Rivers. Janet seldom missed an Auburn Tigers, a Texas A&M Aggies, a TCU Horned Frogs, or a Dallas Cowboy football game. She loved orchestrating family gatherings from Thanksgiving Dinner to Christmas Breakfast, to Sunday nights with huge bowls of popcorn and Disney, Bonanza or Mission Impossible on the TV. She is survived by her brother Fred Paul Elliott; two sons, L. Dean Waggoner (Kathy) and Dr. Paul Waggoner (Cathy Simpson); and by her son-in-law Bobby Rochell. Janet is also survived by eight grandchildren including: John Waggoner (Crystal), Michael Waggoner (Shelli), Dr. Janet W. Snyder (Steven), Alicia W. Menard (Grayson), Katelyn W. Boatwright (Brandon), Katie R. Ballinger (Josh), Dr. Samuel Rochell (Sabra) and Sarah Waggoner. Janet is also survived by 14 great grandchildren. Janet was preceded in death by her parents; her husband of 58 years, Gerald B. Waggoner, and her daughter Anne W. Rochell. Mrs. Janet Waggoner will be laid to rest at the Pettusville Methodist Church Cemetery following a private family service led by Dr. Robert A. White, Jr. at the Limestone Chapel Funeral Home. In lieu of flowers, the family requests donations to the St. Jude Children’s Research Hospital, the Tunnels to Towers Foundation, or the Limestone County Hospice.

Janet (Sue) Elliott Waggoner, 87, of Athens AL. passed away peacefully at her home with family present on April 23, 2022. Janet was born March 3, 1935, in De Queen Arkansas to John and Imogene Elliott. In 1937, during the Great Depression,... View Obituary & Service Information

The family of Janet Sue Elliot Waggoner created this Life Tributes page to make it easy to share your memories.

Send flowers to the Waggoner family.