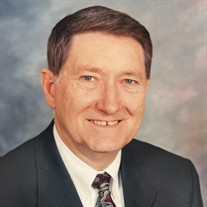 On Friday evening, December 17, 2021, Wyman Logan, a loving husband and father of two boys, passed into heaven from his home at the age of 81. Wyman was born on June 9, 1940, in Lawrence County Alabama to George and Mamie Logan. On August 19, 1960, he married Carolyn Sue Quesenberry. They raised two sons, Joel and Brent, who would become Baptist pastors. In 1964, he earned his degree in mathematics from Athens State College while on athletic scholarship for basketball. Afterwards, he pursued a career at IBM as a computer programmer, during which he worked in the space program on the first Apollo mission to land on the moon. He would later retire from Monsanto as the Data-processing Superintendent at the age of 57. Wyman was a lifelong Alabama football fan; and played on several state championship teams at Austinville School in Decatur, Alabama. However, family and church were the passion of his heart. He was saved through the grace of our Lord Jesus Christ at the age of 14 at Moulton Heights Baptist Church under the ministry of Pastor Tom Freeny. At the age of 17 he committed his life to serving the Lord. He was faithful to every church service and never missed the opportunity to see his children play sports. Wyman made it a practice to read the Bible through on a yearly basis and loved building and teaching the adult Sunday school class in each church that he was a part of. He was known for his integrity and ability to bring a thoughtful settledness to every aspect of life, regardless of the challenges. Wyman was preceded in death by his father, George and his mother, Mamie. He is survived by his wife Carolyn, his two sons, Brent and Joel, seven grandchildren, his sister Charlotte, and several cousins, nieces and nephews. A funeral service will be held at Sweet Springs Baptist Church in Ardmore, Alabama on Tuesday, December 21, at 2 PM with his sons officiating. Visitation for family and friends will be held at Limestone Chapel Funeral Home in Athens, Alabama on Monday, December 20, from 5 to 8 PM. Flowers or donations may be sent to Sweet Springs Baptist Church; 26250 Sweet Springs Road, Ardmore, AL.

On Friday evening, December 17, 2021, Wyman Logan, a loving husband and father of two boys, passed into heaven from his home at the age of 81. Wyman was born on June 9, 1940, in Lawrence County Alabama to George and Mamie Logan. On August 19,... View Obituary & Service Information

The family of George Wyman Logan created this Life Tributes page to make it easy to share your memories.

Send flowers to the Logan family.