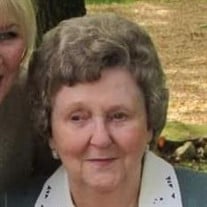 Dorothy “Dot” Marie (Gordon) Bentley, age 92, passed away in the early morning at her home on Friday, February11, 2022. She was born January 11, 1930, in Limestone County, Alabama where she was a lifelong resident. Dot was the daughter of John Michael and Wavy (Clem) Gordon. She was preceded in death by her parents and husband Kirkland Bentley. Dot is survived by two sons, one daughter, and their spouses: Michael “Butch” and Linda (Scott) Bentley, Charles Alan and Honey (Witt) Bentley, and Beverly Kay (Bentley) and Michael W. Kelly, all of Athens, Alabama. Also, Dot has one granddaughter, Jordan Bentley (Kelly) and spouse Chris Porter. She has one great-grandson, Kade Alexander Porter. Other family members include her two younger brothers, Malcolm and Gene Gordon, and their families. Dot was a devoted wife, loving mother, and faithful Christian. She was a lifelong member of Sardis Springs Church of Christ. She grew up as a hardworking Limestone County farm girl as part of the Greatest Generation. She enjoyed sewing and was an expert seamstress. Funeral services for Mrs. Bentley will be Tuesday, February 15, 2022, at 1:00pm at Limestone Chapel Funeral Home with Eddie Littrell and Mike Kelly officiating. Visitation will be from 11:00–12:50pm at the funeral home. Burial will be at Limestone Memorial Gardens. The family would like to express their deepest appreciation to caregivers Judy Stinson, Debbie Meadows, Pam Burrell, Sheila Miller, Wanda Guthrie, Haley Hargrove, and Linda Scott. You are the best. In lieu of flowers, contributions may be made to Hospice of Limestone County.

The family of Dorothy Gordon Bentley created this Life Tributes page to make it easy to share your memories.

Send flowers to the Bentley family.