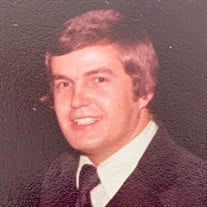 Charles "Ronnie" Poole September 29, 1953 - October 20, 2021 The funeral service for Charles “Ronnie” Poole, 68 of Athens, AL will be Tuesday, October 26, 2021, at 3:15 p.m. at First Presbyterian Church of Athens with the Reverend Dayton Wilson, the Reverend David Palmer, and Judge Jimmy Woodroof officiating. Burial will be at Roselawn Cemetery with Limestone Chapel directing. Visitation will be Monday, October 25, 2021, from 5-8 p.m. in the gym at present Athens Middle School (former Athens High School), 100 US-31, Athens, AL 35611. Ronnie passed away on Wednesday October 20th, 2021, in Huntsville Hospital. He was born September 29, 1953, in Athens to Charles Cecil and Jean Knox Poole Hampton. He was lovingly raised by Larry Esque Hampton. Ronnie graduated from Athens High School in 1971. While attending Athens High School, he was elected to Boy’s State. He was class president, president of the Student Government Association, president of The National Honor Society, and elected by his classmates as Most Likely to Succeed. He had numerous graduate degrees from The University of Alabama and The University of North Alabama. He was a member of First Presbyterian Church for 46 years where he served as deacon. His mission in life was to love his Lord, his family, his friends, his country, and Athens City Schools. Ronnie served in education for 38 years. He taught at Athens High School, was Assistant Principal of Athens Middle School, and Principal of Athens Elementary School. During that time, he was elected Young Educator of The Year. He developed the Peer Mediation Program at Athens Middle School. Ronnie had a tremendous positive impact as the principal of Athens Elementary School. The school is known for its warm, family atmosphere and excellent student achievement. He laid the foundation, as a strong culture builder and a believer in building on individual strengths. During his time as principal, Athens Elementary School received many accolades, one of which was being named an Alabama Torchbearer School, an award which recognized high-performing schools. He left a legacy of high expectations and positive culture that lives on today. Ronnie was an avid sports fan. He loved Athens Golden Eagles and Alabama football. He played football and wrestled for Athens High School. He was the defensive coordinator for the Athens High School football team. In 1987, they tied a school record for seven shutouts. There were seven players off of this team that signed college football scholarships. He coached wrestling and also started the first middle school wrestling team. They went undefeated for two years. He coached boys and girls tennis. Some of his happiest times were spent with the students he coached and taught. He cherished the time spent with his Athens City Schools family. Ronnie had a special relationship with his family. He loved each member with all his heart. On December 28, 1974, he married his best friend and love of his life, Janet. They were blessed to spend almost forty-seven years together. They started out their marriage lovingly with children within the school system and then happily established a family of their own, that they adored. He was preceded in death by his parents, paternal grandparents, Homer and Mildred Poole and maternal grandparents, Willie and Hettie Knox. Survivors include his wife Janet Thompson Poole; son, Charles Jameson “Jaime” Poole (Sandy); daughter, Sarah Elizabeth Poole; two grandchildren, Elizabeth Shattuck and Zack Shattuck; sister, Wanda Horsley (Mike); brother, Barry Hampton (Joely); nephews, Nathan Horsley (Jessica), Alston Hampton, and Bryce Horsley; nieces, Sophia Hampton and Harper Horsley. Pallbearers will be David Poole, Alston Hampton, Nathan Horsley, Mike Poole, Carl Poole, Dick Smith, Larry Keenum, and Bill Anderson. Former Athens coaches and their wives will serve as honorary pallbearers.

The family of Charles "Ronnie" Poole created this Life Tributes page to make it easy to share your memories.

Send flowers to the Poole family.